We have had many dear friends though the years who serve in law enforcement. I was reminded again this week that those who protect and serve are special people. They have families. They hurt. They live under stress and strain that few people ever know. They are not perfect, but they deserve our respect and desire our prayers.

We need them and they need us.

My son and I were walking through downtown Dallas. Just days before, a madman had opened fire on a large crowd, targeting Dallas police officers. Five were slain.

Across the street from Dealey Plaza, where President John F. Kennedy was assassinated, I approached two Dallas police officers. They were guarding yet another street that was shut down after the tragedy. My words were simple, “Thank you for your service. We are praying for you.”

The sense on the street was something like New York City when we were there days after 9/11. Senseless deaths. Shocked people. Hurting hearts.

I was not prepared for the response of the first officer. He said, “Would you pray for me specifically?” He then gave me his name…twice. He wanted to make sure that I remembered. I will not forget.

We stood there on the street corner and prayed together. As I prayed I heard both officers voice their own prayers to God. It was such a joy to hear two men serving in authority call on the Lord. In the distance a protestor was sho 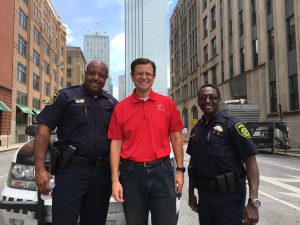 uting his message over a loudspeaker. All I could hear was the name of Jesus being spoken softly by the officers.

Both men testified that they knew Christ as their personal Savior. These were more than fellow citizens, they were fellow believers. My son Grant took a picture of me with the two men. It was a moment we will both remember.

I am grateful to God for those who are willing to put their lives on the line to protect our lives. What is the biblical responsibility of Christians to these men and women?

You will be amazed how a smile and a word of gratitude will open a door for you to speak to someone in law enforcement about Jesus. Sometimes, like I did, you will find a fellow believer who needs encouragement. And always you will find an officer that needs prayer.

Pray for Dallas. Pray for America. And pray for those who protect and serve.