Like many Americans I had the opportunity today to go by the cemetery where our family members are buried. The rolling hills were decorated with flowers and flags. It seems like just yesterday that I was at my grandparents house on Memorial Day. Now they are all with the Lord.

I only had the opportunity to know one of my grandfathers. Grandpa Martin was my hero and my friend. At this stage of life I would love to go back and sit under the cherry tree and listen to him talk. He never had much to say, but what he said always seemed to be important.

Grandpa seemed to wrap several lifetimes into one. He was a farmer all of my life. I can see him on his tractor now riding through the fields. Before I was born he labored in the coal mines of West Virginia. The only evidences of those days to me were the black lung he battled until the end of his life, and a thin line of coal dust sown into his ear from a mining accident. (I always thought that gray line was a badge of honor and wished that I had one just like him!)

But there was another life before all of those years. Charles Howard Martin served in the United States Navy. As an electrician he spent most of his time onboard ships helping to keep things working well. Then came World War II. 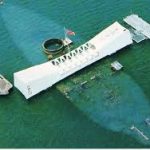 On December 7, 1941 Pearl Harbor was bombed. Soon after grandpa was shipped to Hawaii to help with the clean up.  Before he died I had the opportunity to stand at the USS Arizona Memorial with him. I watched as he read the names engraved there and remembered the weeks after the attack.

Today we all remember. We remember those who gave their lives for our liberty. On this Memorial Day I remember my grandfather and his generation. They truly were heroes. I wonder what future generations will remember about us…