This week I am preaching a revival meeting in the Washington, D.C. area. My heart has been stirred afresh. The future of our nation hangs in the balance. In just a few days we will elect a new president of the United States. That election will determine more than the presidency. It will decide the course of our Supreme Court and the laws of our land for generations to come. 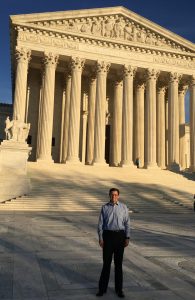 At the Supreme Court
October 2016

Christians should be the strongest and most concerned citizens in a nation. They should pray and they should participate. As Americans we are blessed (spoiled really) to live in a land of tremendous freedom and opportunity. We have much to answer to God for!

Yes, Christians should vote in this election. Yes, I will vote. And here’s how…

Vote as unto Lord. Not just for yourself, not just for your children, not for your political party. Like every other area in the Christian life, your vote is to be done to please Christ (Col. 3:23).

When you walk into the voting booth you are not alone. A believer never is. Cast your ballot for righteousness. A holy God is watching. Whoever your president is, the Lord Jesus Christ is your King. Vote as to the Lord.

Vote for liberty. Leaders either lead their people into bondage or into freedom. One of the characteristics of the God of the Bible is that He never enslaves men. He created us with conscience. He gave to us free will. He extends to us an invitation to true liberty in Jesus Christ. Part of the genius of our founding fathers was their biblical world view on liberty.

Our land does not need a leader who wants to impose their agenda on our freedom. Our prayer should be “for all that are in authority: that we may lead a quiet and peaceable life in all godliness and honesty” (1 Tim. 2:2). Vote for liberty.

Vote for law. God does everything decently and in order. Government was His idea. It was established for one purpose – to protect men from their own destructive, sin nature and the sin nature of others. Law is necessary. America has always been a nation of laws. Our country has been guided by a constitution that has served us well.

Vote for life. What a sad indictment on our nation that such a principle would even have to be stated. Who doesn’t want to live? To enjoy the world God has graciously given? And yet, society has so devalued life that now we murder unborn children and legalize assisted suicide. This is not of God.

If every other issue becomes cloudy and the choices seem unclear…a Christian should always side with the One who “giveth to all life, and breath, and all things…For in him we live, and move, and have our being” (Acts 17:25, 28). Side with the Creator and Sustainer. Vote for life.

The current political discussion, media coverage, and social media debate centers on the people who are running for office. Government has always been bigger than individuals. Instead, we must look carefully at two very different platforms and the principles that should guide our country.

It is true that our kingdom is not of this world. Yet as citizens of a Heavenly Kingdom we are supposed to make a difference in this world. Salt and light must do their work.

Pray. Vote. And then pray again. May God help our beloved America.

(Visit awakeamericaonline.org/2016-party-comparison.html to view a comparison between the two platforms. This downloadable document will help you to be more informed as you pray and vote.)