In just a few days Lincoln would “belong to the ages.” His life, like the Civil War, was soon to end. The final stages of battle were underway. 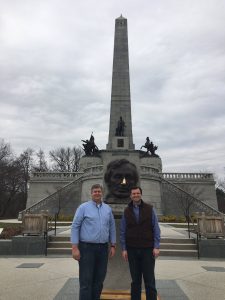 With Pastor Mark Wilkerson at Lincoln’s grave in Springfield, IL

Lincoln has always been my favorite president. On my desk are two volumes of Lincoln’s letters and speeches from 1832-1865. From time to time I enjoy seeing what Lincoln wrote or spoke on a particular day.

On the closing pages I have found an amazing entry. They are words written only eight days before his race was finished. In it is more than a message for his favorite general. Here we find a message for us all…

Gen. Sheridan says, “If the thing is pressed I think that Lee will surrender.” Let the thing be pressed.

On this side of history we know that he was right. On his side, he only knew that April 7 was no time to let up. It was time to press.

Another warrior wrote, “I press toward the mark for the prize of the high calling of God in Christ Jesus” (Philippians 3:14). Let the thing be pressed.

Our oldest daughter is nearing high school graduation. As we have journeyed through this last year of high school together we have encouraged her to finish strong. In my experience most people fall short just before the end. They coast when they should press.

My pastor often said, “People remember how you start and how you finish.” Many start well. Few finish well. The secret is near the end – let the thing be pressed.

I don’t know what your “thing” is, but if God has given it to you, do not let up now! Fight your good fight. Finish your course. Keep the faith.

Let the thing be pressed.

So I’m standing in the airport minding my own bu

Another mask. Another flight. 😷 Appreciate your

Tammy and I enjoyed following Grant and the golf t

This boy is always into something. He loves life a

Tammy and I are grateful for our girls. Love you M

A slight detour this afternoon to take our college

On this #constitutionday I am rereading the Consti

Drove up to see my 2nd dad and mom between meeting

Enjoyed walking 9 holes with these boys after scho

We are thrilled with how the Revival Praying Compa

Enjoyed a family day at the lake! No labor on Labo

Our Israel tour that was scheduled for this year h

A new Bible message on our YouTube channel - “Wh

My man starting 10th grade today! I am getting old

Tammy and I met @thecrowncollege more than 25 year

So good to spend some extra time with my girls thi

You can now order the Revival Praying Companion Gu

A happy BIG birthday to my only little sister! We