While preaching recently in the beautiful state of Connecticut I was driven through several old cemeteries. Very old. It was fascinating to see markers going back to the 1600’s! 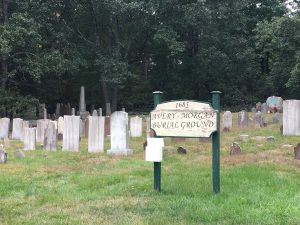 It may sound strange but I have always enjoyed visiting cemeteries. Reading the epitaphs. Noticing the ages. Imagining the stories. Every memorial is a reminder of a fleeting life and an eternal soul.

One afternoon between meetings I took a brief run. As I came upon a cemetery I noticed the star of David prominently placed at the entrance. Walking slowing through the rows of grave markers I was overwhelmed frankly by the hundreds and hundreds of Jewish families that had been laid to rest in that place.

Did they ever come to know the true Messiah?

I love Israel. God is not through with His chosen people and I continue to “pray for the peace of Jerusalem.” It is my fervent hope that America will always be a true friend to the nation of Israel.

There are many Messianic Jews, precious people who have come to accept the Lord Jesus Christ as the long-awaited Savior. Thank the Lord, some have entered into the family of God through Christ. Yet, two thousand years removed from His coming, so many continue to sit in blindness.

As I meditated on this truth my own heart was convicted. Is it possible that we all are in some way missing the Messiah?

When the Lord Jesus came almost the entire world missed Him. The sad words, “because there was no room for them in the inn,” are descriptive of the attitudes of most people, both then and now.

Some things never change. Many willfully reject Him. Others ignorantly neglect Him. Both miss Him. Worldly and religious people have the same problem: everyone is consumed with their agenda, and most are missing Messiah.

This world will not miss Him when He comes again. Christ will not be ignored forever. Do not neglect Him in your heart and home today.

Do not miss Messiah.

These pictures were taken on the same flight, a re