Many years ago I learned how to say thank you in a variety of different languages. I am no linguist. The languages that I have taken have not taken on me! But it was enjoyable to learn how to say thank you in Spanish, German, Arabic, Japanese, Chinese, Italian, Russian, and French. I have used this in my travels and found that everyone enjoys a thank you…especially in their own language.

This week I returned from speaking in a prayer conference in Quebec, Canada. It was my first time to this French-speaking province and I was truly blessed by the kindness of God’s people there. The family of God is wonderful wherever you go.

My messages were all translated into French. The meetings were all reverse interpreted for me. But the prayer times were mostly in French. It was thrilling to think that all of us were praying to the same Father and He understood not only our languages but our hearts.

Heaven will be amazing! Some from every language will be there (Revelation 7:9), but we will all understand one another perfectly. As the people prayed I was struck by their fervency. The simplicity and sincerity of how they talked to God. It was a humbling thing to hear.

There was one word that was repeated hundreds of times. It was one of the few words I could understand. Each time it was spoken there seemed to be heart-felt emotion in it… 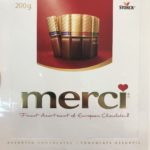 A chocolate thank you from Canadian friends…one of my favorites!

It is the French word for thank you. Over and over it was spoken…Merci, merci, merci.

Merci, Lord! Mercy, Lord! It is both my prayer and my praise. I need His mercy today and every day. And I am grateful to God that “his mercy endureth for ever.”

The French language is beautiful to hear, but perhaps the most beautiful word is merci. It is my favorite way to say thank you.

Picnic at the pond & fishing on the farm! Love sum

A great number of preachers with us today for the

Starting Monday! So excited about this Enjoying th

Please plan to join us at this year‘s @southwide

Seeing continued answers to prayer for our friend

Passed our state capital on the way to the airport

Have you been annoyed, aggravated, and agitated by

Flying today to Kansas to preach in a camp through

5 of us celebrating on the 5th! Missing the rest o

Look up and see how beautiful the heavens are and

It has been great hanging out with these guys at c

So good to see God using @lauren_elisabeth___ at c

Today we begin a NEW STUDY of the book of Jonah! T

This man is my hero, the man I want to be. He is a

We have had a great time this week with the family

Great time with dad and the boys on the golf cours

On Jones Street in Savannah, called one of the mos