Recently I was sitting in my study at home when my oldest daughter came in and proudly announced, “Dad, I am about to write my first letter.”  She is thirteen.  How is that possible?

Now, she has written cards, short notes, and plenty of text messages – but a letter?

Letter writing has been all but lost in our generation.  While I am not opposed to messages of 140 characters or less, there is something deeply personal and powerful about a letter that cannot be conveyed in short bursts of communication.

I know that I am in danger of sounding terribly old, but I still enjoy getting a letter – especially a handwritten letter – in the mail.  Surveys of high school seniors have actually shown that they enjoy it too.  That is because a real letter shows interest.  It takes time, thought, and effort to write a letter.

There are several professors at Crown College (I am not one of them) that could articulate the technical aspects of good letter writing.  My desire is not to expound the beauty of the well-written letter or the mechanics of salutations and closings.  Instead, I hope you will think about how writing a simple letter could make a difference in someone’s life.

A letter of encouragement, wisdom, love, or even correction is an investment in the life of another individual.  Ask Paul.

Some of the Apostle’s letters were to individuals like Titus or Timothy.  Others were to groups of people, like the churches of Galatia.  Some letters were meant to give encouragement, like the epistle to the church in Philippi.  Still others were meant to be corrective, such as the letters to the Corinthian Christians.  In some letters Paul requested something, as in the letter to Philemon.  In most, his desire was to impart something.  Every letter had its purpose.

Letters do not have to be long to be helpful.  One brief letter may convey the message that someone you know needs.  Writing letters can be a real ministry to hurting people.

Another distinct advantage of letter writing is that they can go where you cannot.  And they can stay long after you are gone.

Only a handful of Paul’s recorded sermons remain.  Little is known about his day-to-day conversations.  Yet his letters, inspired of the Holy Spirit, continue to be used 2,000 years later.  While I am not suggesting that our letters will be inspired, I do believe that our letters could be the source of inspiration and instruction that someone else may need. 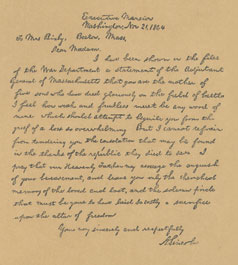 I am out of town as I write these words and will still use Facetime to see my family.  I have just answered a text and will no doubt make another call soon.  But sometime in the next few hours I hope to write a letter.  A real letter.

Why not plan to do the same?  Maybe you could begin with a letter to someone that has invested in you, just to let them know just how much you appreciate their influence.

Many days a letter has arrived at just the right time.  I have a large file of letters from friends that I have received through the years.  Sometimes when I am having a hard time I pull the file out and read them.  A letter from my dad when I was away at college.  A letter from a former student that is applying what they have learned.  A letter from a young person asking for prayer.  They still speak.

Let me offer a few practical suggestions for letter writing:

The important thing is to start.

Writing letters is a discipline, and like all disciplines it produces a rich reward.  My daughter’s letter writing project was an assignment to write an aging missionary who needs encouragement.  I am grateful that her teacher was wise enough to connect the spiritual benefit with the academic pursuit.  Letter writing is a means…a means that, used effectively, can produce wonderful results.

Perhaps a letter to a missionary would be a good place to start for all of us.  Ask God who needs your encouragement and start writing.

These pictures were taken on the same flight, a re